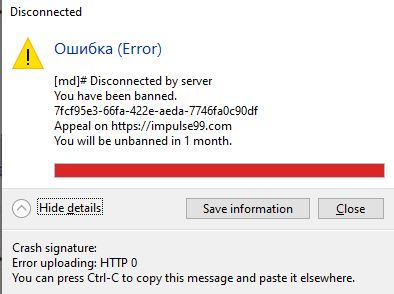 Any extra information about the ban, such as what you were doing or why you should be unbanned: So I play on this server like for 40 hours, and now I come on after a 30 minute break and I crash and get this. I don’t know what happeneing, plz fix

You were banned by our anticheat, which is very reliable. This is unlikely to be a false positive. Do you have any good explanation?

I was originally connecting to a different kind of gta rp, RageMP and had left the game open, not knowing it would change the game files, which resulted in the crash. I know this was stupid and bad idea, but their is nothing to hack on this server. I play here all the time with my drift setup and never had the disconnect, I apolagize for this inconvenience and I will not be installing other mods ( the ragemp didn’t even work after

), I know it is ban for cheat, but I really cannot dispute it because it no hacks, it is just installing ragemp while fivem had running

No, you got banned over 3 minutes after you loaded in, not “while connecting”, for something that cannot be caused by what you claim…