1. Player UID: 1064690
2. Player name: Blanceoo
3. Time and date of incident: This whole week 27/07/22 - 02/08/22
4. Description of incident: Blanceoo started to harass girls, calling them very ugly names all because he got ignored and shut down by those said girls. Then he started to harrass some of the members of NC and Midnight, including me, and in the screenshots you will see that he went way too far. He comes to car meets just to ruin them, so we blacklisted him from any future car meets, and he harasses us when he gets kicked from them. This has been going on all week, probably longer than that. He also went into discord DM’s with Drifterz, and tried to get him to break up with his girlfriend, spreading lies that she was “unfaithful, not loyal and was cheating” while he’s on vacation. Please do something about this guy, preferably a perma mute or even a ban. He’s going way too far and out of control.
5. Proof (preferably screenshots/video): 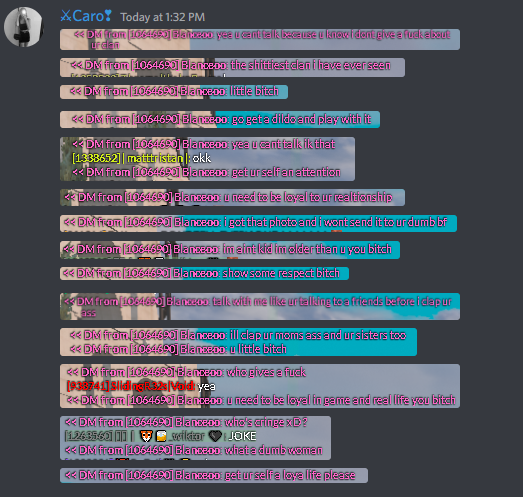 But we don’t police DM’s? Especially on Discord. If you find pictures where he is doing this in public then feel free to post them. Also, you make this seem very one-sided, when you guys have also been harassing Blanceeo in public chat multiple times. Both sides (the NC clan and Blanceeo) have been warned to not continue this useless drama in public chat, but none of you have listened. In my opinion, it’s best all of you ignore eachother, or get punished.

Really? So this kind of behavior goes unpunished? No way this is fair.

There is no point to punish DM’s. There’s /ignoredm. For Discord you could just block them. Like I said, if he’s been doing this in public chat, then you’re more than welcome to post it and he’ll be punished accordingly.

That’s the thing, he won’t do it in public chat because he knows that if he does that he’ll get punished, that’s why he does it in DM’s.

i have ignored him right after the last messages he sent, just so i could get the proof, and i’m not in touch with him i don’t even reply to him he keeps sending me dm’s, calling me out in public chat to “reply to my dm’s mf” and dw i’ll back off now until he continues this in public chat.

As Fred said, we don’t take action against ingame DMs as you can just /ignoredm the person. We also can’t be expected to punish someone on FiveM for something that happened in a 3rd party application in a private chat.

If they continue harassment in public chat (either in-game or on the Impulse99 Discord), they will be dealt with accordingly. There are some plans to make /ignoredm persist across sessions in the near future, which should maybe help you as well.